Wild Wakeup Call... Or Is That Wake Up Call In The Wild?

I need to get one of these for our house.  Immediately.  Our neighbors have one (I know because I've  heard it) and now I know why it is essential safety equipment for any one living in the middle of nowhere country.

Anyone who has spent any time at all in the military or around military knows the chaos that is an base-wide exercise.  There are various types of these but they all mean that everyone will be working just about 24 hour days from before the exercise until right after the exercise when everyone drops dead from exhaustion...

So given that point of reference, you might be able to understand that when my husband got up at 3am (after having come home and gone to bed at 10pm for more days in a row than I want to count), he wasn't in a very clear frame of mind.  All he was thinking about was his desperately needed cup of coffee that he was going to buy on his way to work.  When he opened the kitchen door he didn't quite register the large, dark shadow on our porch.... sniffing around inside the empty metal garbage can she had knocked over.

Luckily, he had not tried to open the storm door yet (although the critter was so close to it that it would not have opened very far anyway (it was that close).   Thank heavens for small blessings). He said it took him a minute to realize just what was blocking his way...  A four to five hundred pound brown bear.

Personally, I think I would have had a heart attack.  My husband?  He pounded on the storm door (while still holding on to the main steel door) to get Mrs. Bear's attention in order to scare her off.  Apparently, my husband is not sufficiently impressive enough for the bear because he said she looked up at him with an expression that said, "Oops, my bad.  Was this your garbage can?"  Then she just turned around and sauntered up the driveway and down our dirt road.

He told me that he had finally discovered something that could wake him up faster than caffeine.  Now that is a real wake up call!

Now I need to move the garbage can back off the porch where it stays during the winter.  This also reminds me to make absolutely sure I remember to bring in the grill part of our BBQ grill every time we grill because the bears like to lick it.  I kid you not.  (It is absolutely gross to think of bear slobber on something that is supposed to cook your food)

But first?  Time to go buy an air horn to keep by the door, because believe me, that kind of wake up call would give me a stroke! 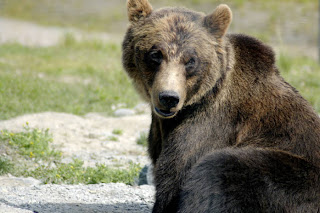 QOTD:  "In light of the rising frequency of human/grizzly bear encounters, the Montana Department of Fish and Game is advising hikers, backpackers, hunters, and fishermen to take extra precautions and keep alert for bears."

"It is also a good idea to watch for fresh signs of bear activity. Outdoorsmen should recognize the difference between black bear poop and grizzly bear poop. Black bear poop is smaller and contains lots of berries and squirrel fur. Grizzly bear poop smells like pepper and has little bells in it." ~ Montana Grizzly Bear Notice

Scribbled by Lemon Stand at 9:08 AM