I Want To Be Running When The Sand Runs Out...

Warning: Lemonade being made today in astronomical quantities... venture ahead only if you have a very large pitcher in your hand... (and maybe a tissue or two... I know I needed them...) 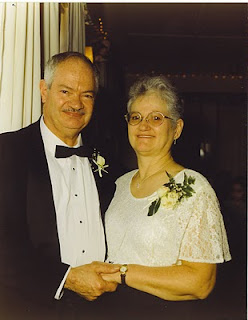 I once wrote a post about my father and since I've been struggling a lot these days, he has been on my mind. I've reread what I had written then and decided to write again of him, because sometimes I need the strength of the most important lesson he ever taught me and because this blog's first mission has been, and always will be, about making lemonade from the lemons of adversity.

My Dad would have turned 74 this year. He died in July 2004. His death was very profound to me. It was sad beyond the reality that I would never talk to him again. Never hug him or be hugged by him again. I would never be able to tell him that I loved him and that I had forgiven him. Looking back, I could probably say that this event was one of the major turning points in my life. A point at which I started my attempt to make lemonade instead of living on a gigantic mountain of lemons.

At that time, I had been housebound for over six years. Sidelined by severe depression and PTSD from my military service. Keep reading because this post does have a positive and happy point to make.

I went to his wake and funeral in a fog. For the next year, I did not grieve. I couldn't. But I did start to slowly look back over his life. You see, my Dad was an alcoholic and I used to think that, in the end, that was all that defined him as a person. During that year though, I started to remember all kinds of things about him.

When he got out of high school, he had a full scholarship to the Boston College of Art. He once told me that he saw the lines of starving artists and instead went into the Air Force. I rather suspect that my grandparents did not encourage him in his talent, and believe me, he was exceptionally talented. They were a product of the depression and I think, like all parents, they wanted theirs to succeed in life and not have to struggle like they had.

I've had a lot of time to ponder this and I think the real reason he didn't accept that scholarship was because he did not have enough faith in his talent, in himself, in the possibility of dreams and the ability to make them come true. His 'art' form was as a cartoonist. He could draw but not write the cartoons and because it wasn't 'serious' art, he didn't think he could make a living at it.

After serving in the military for just over twenty years, my Dad retired. A few years after this he started drinking heavily. This started when I was about ten. By the time I left home, I was hurt and angry at him for not finding my mother, my sisters and I important enough for him to quit drinking. I stayed angry at him until long after I got married and started having children of my own. By then I was beginning to understand that he felt like a failure because he couldn't find a job or that when he did, he couldn't keep it.

He was very intelligent and had gone back to college to get a bachelor's degree in aeronautical engineering. He came within a year of finishing it when the branch of the college he attended, closed. Instead of continuing to pursue it at another of their campus' a little further away, he quit.

To be fair to him, I think he felt the pressure of supporting our family and instead of making some sacrifices for the short term to better his chances in the future, he chose to try to become an insurance salesman.

That decision, he once told me, was because when his sister and nephews died in a fire in Chicago, they didn't have any insurance and nobody in his family had the funds with which to bury them and so they were buried in pauper graves, paid for by the local Catholic church. It ate at him that he could not have them re-interred back in Massachusetts where their parents were buried, which is what would have happened had she had insurance. (I find it tragically ironic that in the end, he also did not have insurance at the time of his own death.)

With every lemon that life hurled at him, he grew more depressed and since he refused admit he had a problem and seek help he just allowed the lemons to accumulate around him. So he self-medicated himself to dim the pain of his life. The pain of his disappointments. The pain of his demons. My Dad died one morning after an all night binge. It was sad as the final punctuation mark in a life that had so many opportunities missed.

Don't get me wrong. I loved my father and I never doubted that he loved me and his family, but it was never enough for him. We weren't enough for him to be able to overcome his demons. The legacy my Dad left to me was the knowledge that giving up is worse than trying and failing. Allowing adversity to suck all the life out of you is worse than picking yourself up and trying again, even when you know it is likely that you will fail again. Defining your life by your past and what you let slip by instead of what you reached out and grabbed for even if you fall... well, that's just a waste.

It finally occurred to me that, with the exception of the alcohol, I was traveling the same road he had taken and that if I didn't do something drastic, I would end up in the same place he had. I don't know what it was about a song playing on the radio, that suddenly clicked a switch inside of me and helped me bring my own life into crystal clear focus. It came out of nowhere, or maybe it was just the right time for me to really see the big picture. Whatever the reason is, I heard a song by Rascal Flatts that nailed my father and I cried like a baby. I finally allowed myself to grieve for the man my father was. The man he might have been. But more importantly, the discovery that I still had time to change the course of my life.

I spent the morning at an old friend's grave
Flowers and amazing grace, he was a good man
He spent his whole life spinning his wheels
Never knowing how the real thing feels
He never took a chance or took the time to dance

I stood there thinking as I said goodbye
Today's the first day, of the rest of my life

I'm going to stop looking back and start moving on
Learn how to face my fears
Love with all of my heart, make my mark
I want to leave something here
Go out on a ledge without any net
That's what I'm going to be about

I want to be running, when the sand runs out.

Well, that about said it all for me and though there is more to the song, I think you get my point. The legacy that my father left could have been very negative, but instead I choose to believe that he showed me a possible future with the knowledge that it didn't have to be that way. All I had to do was choose to live. Choose to love. To look at adversities and change them into opportunities. To take chances and to pick myself up, every time I fell because trying and failing was infinitely better than not ever having tried at all.

I now believe in my heart that my father was a good man who lost his way and could never find his way home again. So every time I struggle to leave the house now and brave the world outside it's protective doors, I think of my Dad and the most important lesson he ever taught me. I still struggle daily with my own demons. That, unfortunately, hasn't changed, but even from the depths of my despair, I know that I have to keep trying, to keep working on my own life because the only way I can fail, even in the worst of times, is to not try at all.

I wish I could tell my father one more time that I loved him and I pray he is, at last, at peace. For myself, I pray for one more day with my own family because I truly do want to be running when the sand runs out...